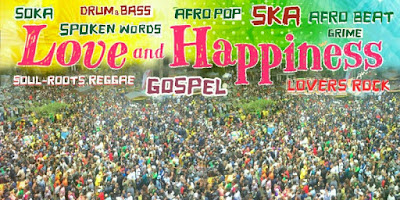 Something new for summer! The Love & Happiness Fest  Saturday 26th August, is set to embrace the feel good vibe and surprisingly, gives artists an opportunity to share their talents. Performers are actually being given up to twelve minutes to sing or perform a different genre, enabling them to add 'appeared at a festival' to their bio-  artists, it's definitely worth planning your time now and going along to this event!

Love and happiness is what we all seek and this event celebrates different musical genres from the traditional such as Gospel to more recent phenomena: Afro Pop and Grime. Spoken Word will also be integrated with appearances from Uncle Sid and Positive Beloved One- I've been invited myself so will make the most of this opportunity too- I might even read, 'A Tropical Tale,'- more of a story than anything else. I think the inclusion of Poetry is well times as it has risen in popularity recently, especially in TV adverts!

Now for a little background. The festival concept has been created by Michael Arkk who was busy listening to Al Green one night and simply thinking about musical possibilities as in what next? Having previous interest in creating a festival, it occurred to Michael that he could organise a small yet very open festival based on the universal term, 'Love and Happiness.' This is a much broader concept than One Love and embraces a common desire understood by just about everyone! This fits in well with the idea of creating a variety world music fest, creating scope for future growth.

Musicians usually enjoy many genres of music. The same goes for Michael who had just finished an event at the Ritzy where he came across some friends who did Afrobeat and enjoyed Afrobeat for the first time. He also discovered Afro Pop which has a different tempo and led him to book Deoba Authentic to perform at his festival as it was so fantastic! 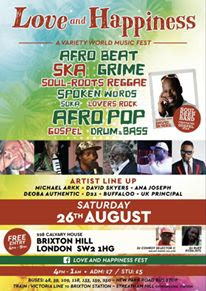 Michael Arkk started out in the world of Gospel, but on this occasion Gospel songs will be performed by The Soul Deep Band featuring David Skyers, who is also a brilliant pianist and keyboard player.  IMichael has known David for many years and he is a Gospel star. David and the band will be travelling all the way from Sheffield and will treat us to some songs from the new album. Interestingly, this is the first time Michael has included Gospel in any of his events since he ceased performing it himself many years ago.

Other featured artists at the event include D21, a Grime artist whose material is upfront, current and positive. There will be Ska, Lovers Rock and Soul Roots Reggae, all of which Michael will be performing. Lovers Rock and definitely some Roots Reggae will also be performed by other artists such as Ana Joseph and UK Principal.

Buffaloo, who started performing at the beginning of the year, will bring his music delivered in charismatic style and usually Ana Joseph supporst him in addition to performing independently. UK Principal is extremely well known, having performed consistently for many years in London and recently in Europe quite a bit too. He has a wide repertoire and is incredibly versatile so it will be interesting to hear his selection.

Michael is also hoping that as there are many international performers in London at the moment he might receive support from one or more on that front.

Two major DJ's will be bringing the sound to the Love & Happiness Fest. DJ Ruff Ryder International will be coming over from Jamaica for the event and will be spinning discs along with Selector C, Galaxy Radio to keep us dancing when the live show ends. Both of these DJ's will play a real mix of music including some of the latest sounds that are hot off the press. It is likely that there will be other DJ's too on the night.

The Programme:
Free entry before 8.30pm when the general admission fee of £8 will apply
4-9pm will be the open mic session
9,30pm- the live show will commence