July 24, 2022
What a fantastic day we had for the return of the Acton Carnival. Perfect really as it was hot and sunny- original carnival vibes and very similar weather to the last one I attended here in 2016. That really was an amazing day and extremely busy. More info here.

This year it was much quieter. This could be due to the interruption in momentum and equally because it is now a ticketed event. Personally, I consider it fair enough to charge a small entry fee and I imagine a great deal of heart searching went into that decision as the carnival is a community event. Ultimately, large scale events require a tremendous amount of finance in order to ensure a safe, successful and fun day.

Macky McPherson, (C.E.O. Urban Delight Ent,) and I arrived during the afternoon as Macky had been invited to play a set for LifeFM.TV. Two Urban Delight Artists, ShishcoBoB and Saint Paul-a rapper, also took the opportunity to come along, re-unite with the rest of the team and entertain the people for a little while. I have to say, both these artists still pack a punch musically and I enjoyed hearing them performing live once again.

The main stage was ablaze. Natasha Amina was the first act that I saw, literally catching her song, 'Everything You're Not,' which she wrote and produced. Natasha came across as an established performer with a highly commercial flavour. I was interested to discover that she has appeared previously at the Notting Hill Carnival, so is definitely on the right track. Natasha was followed by a group of Samba dancers who are based at Pineapple Dance Studios. This was a high energy, exciting performance in full carnival style, whilst wearing high heels! The girls pulled it off wonderfully- unlike my camera which was overly dark at that point! While on the subject of dance, Elevate Arts UK, a young dance troupe performed too and they are running a summer school for children at the Acton Community Centre, 15-19th August.

Having returned to the LifeFM crew, I suddenly became aware of an intense and exciting vibration reaching out from the main stage. I shot back across to witness most of Soca artist Terrah Dan's performance including, 'We Outside,' which presenter Keylah Loudmouth had a go at winding to! I'll add here that Keylah did a fantastic job and is very good at engaging with the audience. Listening to Terrah's song 'Partying,' (2019) on Youtube, I felt as if I was back at Spring Garden, Barbados, during the Carnival as this is in classical Soca style. Luckily, I managed to catch Terrah when he came off stage and would like to speak with him further to discover more about his musical journey. 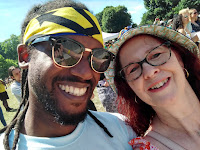 I have surmised, rightly or wrongly, that Terrah is a Bajan artist who is currently living in London. The song I shared above is very traditional and I would love to discover his views about Soca music and its development. The second song I'm sharing, Exercise, is extremely current and Terrah has shared lockdown footage on his channel, Terrah Official TV. You may recall that Soca received a boost in the public eye when it was brought to the attention of the general public during the last ever series of The X Factor, UK, 2018. Olatunji Yearwood, Trinidad & Tobago, gave an exceptional performance that caught everyone's imagination; his dancing reminded me a little of Sammy Davis JR being super- slick. Yearwood is a name long associated with Soca thanks to Bajan artist Edwin Yearwood, Krossfyah. Edwin is known as King of Soca and  his band have had countless hits throughout the Caribbean and beyond. The other Soca artist who also performed at Acton Carnival and whom I barely heard was Ricardo Rawal- I just caught a little tiny but fun snippet. As  you can tell, I love Soca and these guys delivered some rays of joy along side the sunshine.

Kyro Cole is the next and last artist who really caught my attention. I loved his style of rap which was extremely on-point and delivered with great energy; a real stand out to me. There is something about his delivery that topped the usual styles I hear on radio. His song, 'Never Knew Enough,' is very deep and speaks about chasing dreams and ultimately re-considering his life experience. 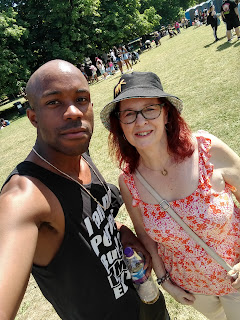 I think this shows us how young people always believe they're in the know. In these lyrics we feel Kyro's switch to reality and the opening of his mind to new truths. I love Kyro's reference to the Black Swan- Interesting as I just blogged about the new TV series Odile! If you don't know, Odile was the name of the Black Swan in classical ballet Swan Lake. This subject is a refreshing change as I so often hear English rappers speaking about fast cars, women or the really depressing side of life- which is brilliantly portrayed by Bugsy Malone in 'Drama,' a song that strips the glamour from drug dealing. I have to add that the musical intro and beat to Drama gets to me more than any other rap, as does the guitar solo. Kyro chose to inform us that he is a London artist of Dominican descent. He is the second person I'm planning to interview as a result of the Carnival. I would like to know more of the vision Kyro had and how his eyes were opened. I am also keen to know how he plans to influence his own future, the big picture. 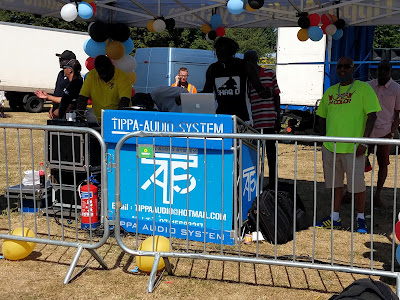 During my walk about in the incredible heat, I spent a few minutes listening to the youngsters of Stardust Steel Band playing Mambo- probably #5, but without lyrics I'm not 100% sure! They gave a good performance and it's great to see steel bands maintain their popularity. Next, I came across sound system Tippa Audio who were doing a fantastic job entertaining everyone. While I was listening they were busy playing the hits that have boomed from sound systems consistently over the years, such as the original Junglist General Levy whose hit, 'Incredible,' sounds as fresh today as ever- what more can you ask for? There was a small crowd busy dancing and enjoying themselves to tune after tune, the real party spirit. I have to say, Tippa Audio is the real deal and they brought so much authenticity and fun to the carnival. 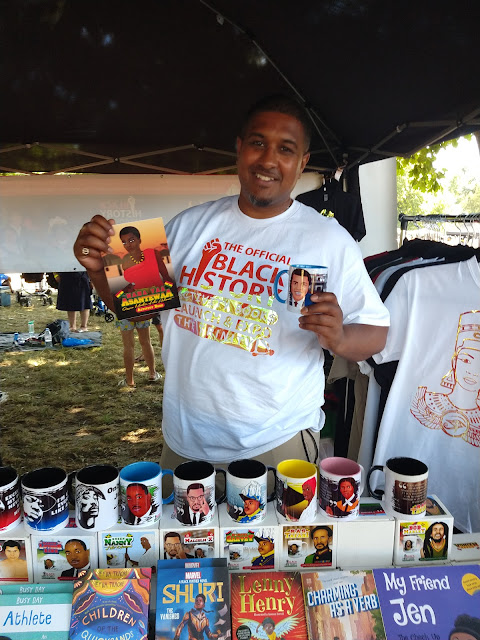 The final aspect I'm going to mention is Black History Activity Books stall. As it says, Black History, a part of our past that still requires a lot more focus and education for children of all nationalities. I think the workbooks are great and there are 22 in total. As you can see, there is a large collection of informative books too. I have a date here for your diary if you would like to go along and see the collection for yourself- Launch & Expo, The Trinity-Saturday, 1st October, 12-8pm, in Birmingham. Check the website link for full information. Sounds fantastic as they have international speakers, presentations, entertainment and much more. 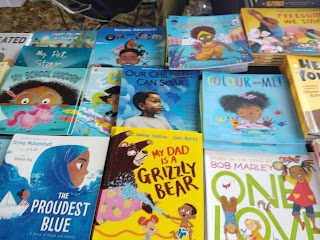 I absolutely loved this event and especially our mini- reunion plus meeting such talented people. It is so good that the world has opened up again and we can move forwards, enjoying fully what this world has to offer. I think an injection of fun does so much for us and I hope Acton Carnival will continue to grow
All shares and comments, especially directly under the post are appreciated!

Its Braap  What's Up Jaz