The Magic Touch- Something that is definitely key to Cassandra London's musical talent! Cassandra has the knack of creating songs people will easily relate to and I have drawn great inspiration from her music, especially, 'Just Cool.' ' Magic Touch,' is a very different type of song, being upbeat and joyful, easy to join in with and relishing in the clever use of a popular, catchy phrase, 'Let your fingers do the walking.' I really like this modern take on Reggae that is without doubt commercially viable.

Last words- Lovey Dovey couples~ This is your song!

Jaz McKenzie~ The Word Magician Contact: itsbraap@live.co.uk
Posted by ITS BRAAP ITS LIFE !! at 20:35 No comments: 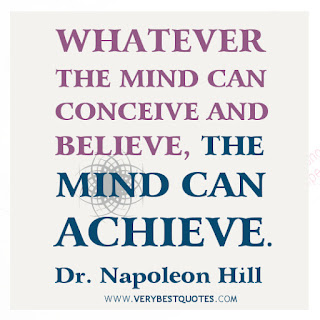 LET THE FORCE BE WITH YOU!
Conceive and believe so you truly achieve
The wonders that lurk in your subconscious mind
Beneath the ripples of thought and you will find
That gradually as all thoughts drift away
They'll pop to the surface, so you can say
'That's a great idea, an incredible dream
But right now it seems beyond all imagining,
So complex, too huge and far out of sight
But I must find a way to prove myself right
However long and whatever it takes
I'll learn all the moves I need to make
And the road might be lonely, the cost very high
But my rocket will shoot beyond the sky
Because my spirit knows no bounds
And universal force is all around
I will achieve, just watch my fly
I'll cross bridges of doubt as I buy
Into the truth of my ultimate dream
Keep believing and accomplish everything
And as you tick the boxes, open more
For you never know quite what's in store! 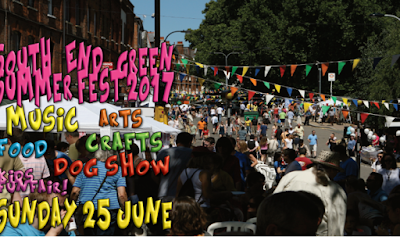 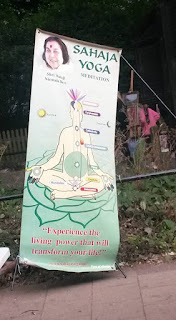 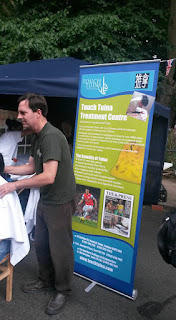 With the stage at the bottom of the green nearest to the open road, and many interesting stalls effectively creating a buzzing street market stretching to the station and beyond, there was plenty to occupy curious shoppers and passing cars, many of whom wound down their windows catching a fleeting summer beat. 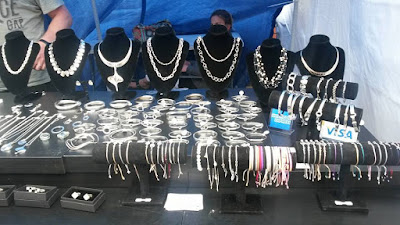 Food and drink represented London's international flavour from different cuisines to modern trends- let's speak cake- oh yes, delicious red velvet cake which gained Lady Diania of Music Media Management's approval as did this spectacular silver necklace- not much gets past Lady D!
As with all good events, children were well entertained enjoying the modern day phenomena, face painting, and having access to a little fun fair which I'm sure was a blessing for all parents! Animal lovers had the pleasure of a dog show- sadly I missed it so am left with memories of Kaos, the family Mastiff/Rotweiler cross, and Dolce it's predecessor- now that's another story but I'll dig out the dog poem for you... 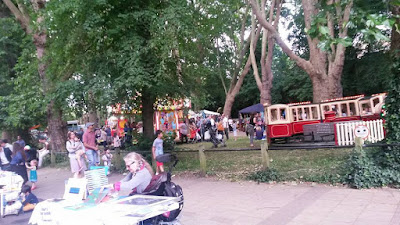 The festival was a real community event organised by Southend Green Association with the help of local venue, The Fiddler's Elbow who supplied excellent musicians and sponsored the musical aspect of these proceedings. I was fortunate to be invited by Kareem Shabazz and we arrived during a blues set, 'The Experience Makers,' I really enjoyed the little I heard of them- wish I'd heard the whole set and judging from the programme  some excellent acts had already performed- 'Hats off Gentlemen It's Adequate,' who are a multi-rock genre band, 'John Etheridge & Vimala Rowe,' now we're speaking serious jazz and guitar; and also the cleverly named 'The AutistiX,' a very unique rock band. Links are all in place so you can check the bands out yourselves. 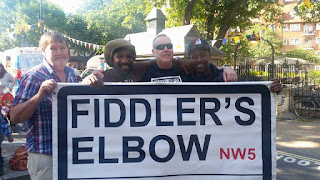 Moving on, 'The Fabulous Micky C & The Wasted Playboys, had a very individual feel bringing a real mix of music- most entertaining and almost defying description! Good job guys and great fun! 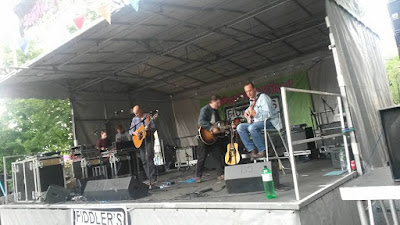 Taking a serious turn, we switched to indie rock and enjoyed a pretty amazing set from 'The Beautiful Game.' My first thought was- what's up with the lead singer? His voice was a little weak but that didn't last long and by the second and third track he (I'm guessing Steven Foxley,) was in full swing. Afterwards we were informed that he was standing in for the band's lead vocalist, Jason Crowley who had been unable to attend. Regardless, I was very impressed by the energy flowing through their music and if Jason has great stage presence and charisma, this is truly a band to be reckoned with. The Beautiful Game did an amazing job,100% energy flowing through their Indie Rock and I was pleased to see a few fans dancing and singing along.

Headline Time- Kareem Shabazz and the Ryddim Kings who blew the crowd away! 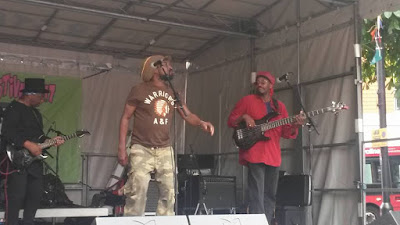 I absolutely love this popular band who create Reggae music from a fusion of musical backgrounds. Kareem has an amazing quality to his voice and you can read more about their live performance here; Previous Review- Live*on Fire! The band got into its flow from the minute they hit the stage so it wasn't long before the crowd welled up around them, joining in- dancing, clapping. Kareem really surprised us when, speaking of love in a general context, he unexpectedly gave us his rendition of Marvin Gay's 'Sexual Healing.' Even took me by surprise! This went down a storm as did Clinton 'Rock' Jones outstanding guitar solo- I believe heaven really is on earth as I felt every note! Clinton ended with a typical rockers melt down and smashed the cymbals with his guitar. 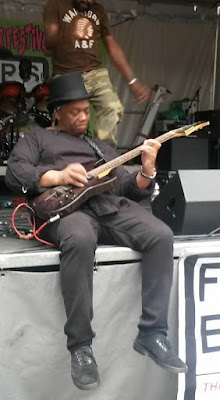 Kareem went on to introduce all his band members who did a terrific job throughout, entertaining us with their solo's. He then invited DJ Sparky Rugged to join them during the band's last song 'Way Dem Ah Gwan,'(from their current album Born on the Streets.) Sparky, the epitome of cool, smashed the crowd with his confident delivery and pertinent timely lyrics that included tributes to well known recording artists and people in attendance- King Tubby's, G Star, and Music Media Management who, with Robert Rex, have a fierce reputation as promoters. 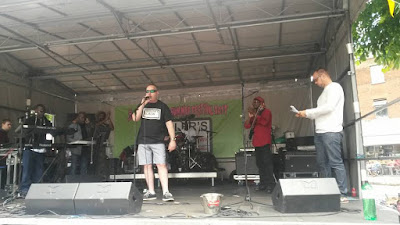 Finally, an event isn't an event without the all important Master of Ceremonies, in this case actor and lover of the arts, Mr Steve Bowyer. The festival was so successful the audience were left begging for more! It really was a fabulous event and great memory maker- you can see from the final pic just how much fun we had! 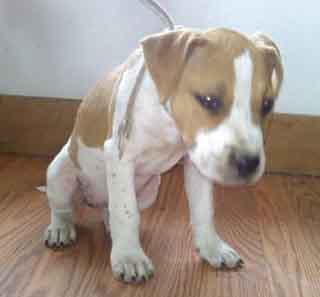 Before we acquired a puppy of our own, my Son begged me to look after his friend's pit bull terrier for the weekend. This poem tells all!

Soooo Dolce...cute little puppy... a pit bull at that!
Tell me... 'How did you manage it?'
How did you manage to reach out with that paw
And claw your way through the sign
Across my heart that said
'Dogs are okay but they're not allowed here?'

2 days... 6 days... 2 and a half weeks!
But all it really took
Was that first little look!
You were so sweet cupped in the arms
of my strapping great lad.
Nose twitching with curiosity
Eyes so bright, connecting with mine
Tongue flickering across my hand as I stroked your neck

SO WHAT THE HECK HAPPENED HERE?
SSSIIIIIGH.... PUPPY LOVE I GUESS!!!

I don't like to think of Dolce now due to the fact she was bred too early and when I saw her again some months later she was so thin it broke my heart. Young lads owning dogs they are unable to care for is yet another of society's issues, so please, think carefully when taking a pet on. We ended up with Kaos- a somewhat larger dog, but at least she wasn't ill treated- just walked at strange times by my teenage son!

Jaz McKenzie~ The Word Magician
Posted by ITS BRAAP ITS LIFE !! at 21:23 No comments: