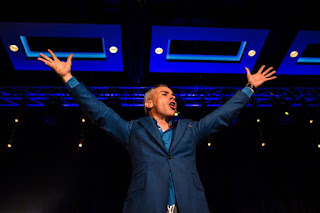 'I went to have a transformational experience. Andy Harrington delivered.' ~ Jaz McKenzie

On a need to know basis that is all you need to know! At least, a far as my experience goes because this event has consolidated some of my requirements, instilling confidence and re-enforcing a desire to move forwards.

So let's begin. In business it's always best to start with the end result and work backwards towards your starting point. For me, the end result of the seminar is a more complete sense of self confidence and determination to find ways to power through life's blocks- usually the 'how to's'- how to publish an eBook for instance. For that reason I have booked a place on one of Andy's brilliant courses because momentum needs to flow and I believe his bootcamp will advance my business knowledge in the required areas; building upon existing skills. I love motivational seminars that actually inspire you and on this occasion have received some new intellectual tools which are already in use- I believe in 'use it or lose it!'

Once again working backwards, we went through different mental and physical processes that were mind altering. On the physical side to my amazement I actually managed to break a square of wood in two with my bare hands! Fantastic way to represent and prove personal power. The processes used clarified my thinking on a highly personal level and helped me to claim my inner power.

So where was my starting point prior to the seminar? Having spent the last four years re-creating myself, which requires focus and the understanding that we continually take backwards steps, I can honestly say that prior to the weekend I have already acquired a greater level of self knowledge and can easily identify default behavioural patterns. I think this helped maximize my experience. I needed a stronger sense of self believe and to learn techniques that I can pull out of the hat when needed. This is what Andy teaches so well.

At the seminar: As you can see the auditorium was filled. There were approximately a thousand people in attendance, the vast majority completing all three days of a carefully scheduled programme with plenty of psychological content to help you sort your life out- and physical activities to prevent you becoming glued to the seat- oh yes, we were encouraged to mingle which aids the release of tension and prevents aching muscles. It also creates a great sense of unity. Bending a metal rod with my throat was never on my agenda but has successfully been added to my skill set if not the CV! Speaking of work and therefore finance, a large part of the proceedings were given over to the hard sell. This was an integral part of the weekend and I believe it had great value for many people. We were given advice/opportunities presented by a number of extremely successful business people with a proven track record which of course gives food for thought. 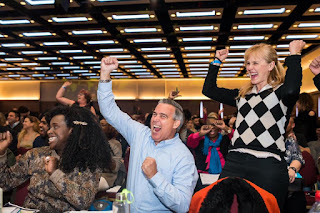 One key word for the weekend was FUN. I laughed so much it deeply reminded me that I am out of touch with my inner jester (archetypes and shadow selves were discussed in some detail.) It is so important to have fun, something I had already realised and am actively working on- in fact, I was out all last weekend with friends and now prioritise looking for amusement each day. 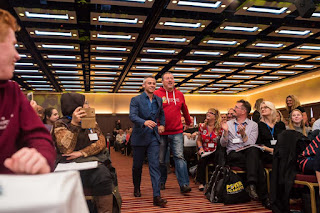 See the guy in the red- major heckler! This was part of the belly laugh and as Andy is an expert in turning everything to his advantage we had a wonderful demonstration of stage presence. The level of audience anticipation was well judged and highly engaging. People can pop out of the room whenever they like- a few did, so you can stretch your legs if you are not in the habit of sitting for long periods, and I did think that over-running coffee breaks for the sales pitches was not a good move- the participants needs should have come first and I found my concentration shifted to coffee!

I really enjoyed the seminar and have clearly benefited from it. Some of the things I learned are working through my mind because we need to embed new ideas and this is a process. Interestingly, in the group comments which have been extremely positive, one person focused on how negative the atmosphere was during the re-empowerment process where people mentally faced and erased three situations that caused them pain. I found this interesting. Having already dealt with areas requiring understanding and forgiveness in my life I couldn't think of things to focus on, sp I decided to use the time to tune into positive energy regardless- and I would like to add that it is not a negative experience when people are dealing with a situation to positively achieve change. You do not have to absorb other people's emotions even in the midst of them and it is not a very long process in real terms. Following the reflection you are taken through an erasing or 'cleansing' process and ultimately reach a point of celebration. The whole purpose is to strengthen yourself and prepare to move forwards. Personally I wondered whether the guy had truly dealt with his demons! As I said earlier, you can leave the room at any point so if something isn't for you, use your feet or plug in your music.

If you seek empowerment or inspiration I definitely recommend attending one of Andy's weekends. Many therapists went along, possibly due to professional curiosity- I sat next to an NLP practitioner who went to all three days and took plenty away with him. Finally, I have attended many seminars of different genres and have to say this is my absolute favourite- an enriching experience which I'm still feeling the buzz from a couple of weeks later.

Jaz McKenzie~ The Word Magician Contact: itsbraap@live.co.uk
Posted by ITS BRAAP ITS LIFE !! at 08:26 No comments:

I really enjoyed my visit to Parallax Art Fair 2017. There are so many stands so I decided to focus only on the art that instantly grabbed my attention- sorry ceramics and jewellery- it wasn't your day! 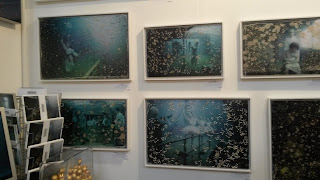 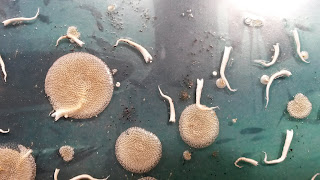 First up, a totally thrilling and novel concept- 'The Sinking World of Andreas Franke.' Andreas' pictures were haunting and mystical, carefully photographed before being submerged in the depth of the ocean once attached to the designated shipwreck via their special magnetic frames. These paintings were left in-situ for a few months allowing crustaceans to form and add some natural elements to the artwork. The photographs have a romantic or tantalising beauty about them and are of a timeless nature which blends beautifully with the ocean's natural signature, giving life to the nostalgic theme. Each exhibition consists of twelve pictures and the originals, worth thousands, are not on display;instead we viewed carefully prepared copies. The results of this process are stunning and have been viewed by many scuba divers before being removed from their nautical galleries- the Vandenberg, Stavronikita and Mohawk Projects in or off the coasts of Key West, Barbados and Fort Myers respectively. Andreas's work is of huge artistic significance and has graced the walls of castles and galleries worldwide. 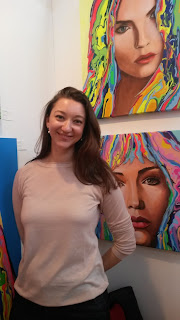 Yelizavyeta is from Berlin and I would describe her as an energy artist. She produces realistic portraits enhanced with abstract art in bold rainbow colours to create her personal style of pop art. This collection of strong women emanates their power and sensuality. These are Queens of the modern world, lively characters who embrace their individuality whilst maintaining a very slight edge of vulnerability. They have a magnetism about them and I would love one in my living room! 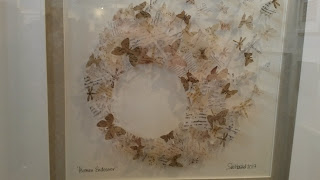 When it comes to emotions Sue Haskel, who has her practice in London, displays an exciting insight into the human mind depicting it with clever use of paper and card butterflies/dragonflies or even fragments of photographs. Sue's collages are intricate and thought provoking, using colours, patterns and layers to project her intellectual life concepts. Sue's work attracted  many questions and she acquired a commission whilst I was studying her work. Sue works with clients to create pictures that reflect their desires and I would love to write a poem and have her express it in the medium of her choice. 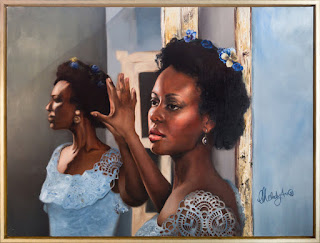 Walking towards the end of an isle my eyes were drawn to a totally stunning self portrait by Melody Amber. Her portrait was an interpretation of inspiration received from the book  L'Ecume Des Jours, by popular French author Boris Vian. Melody connected deeply with the story and produced a series of photographs as part of this project. Without knowing the story I deduced from the touch of the mirror and the fact that Melody was in profile, a sense of conflict and desire to discover her true self which appears painful and slightly beyond her grasp. I have now read a precis of the story which is quite complex, based on love and physical/emotional decline however, from a personal perspective I believe this image can be re-interpreted and see the woman as representative of life's 'givers' who realize at some point that they have been so busy meeting the desires of others that they have neglected to expand themselves. There's a great deal to be said for artistic license and interpretation! 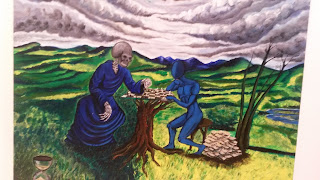 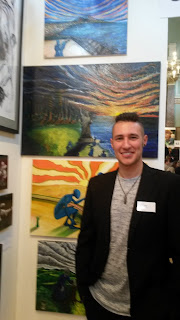 Giuseppe Vaccarella - whose work was positioned next to Melody Amber's, had a small display area and you can see here, a huge smile! I would categorise Giuseppe's work as, 'challenging contemporary.' His four paintings excited my mind. I mentally joined the dots between them, discovering a direct interpretation of and connection with Giuseppe's intentions. I discovered a definitive take on society from dawn to dusk, challenging man's development and future prospects. Using humanoids as androgynous representations of our population, we are thrown into both the firey atmosphere of the city and somewhat disturbing countryside that are both distinctly uncomfortable and where the future of mankind is ultimately a gamble! 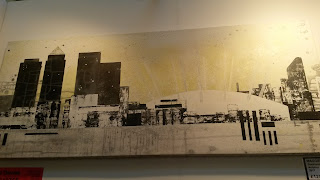 My final choice of artist is Maggie Davies from the UK, whose 'Adventures in the City' are currently experiencing a rise in attention and popularity- particularly in the USA. Maggie conveys the power of our city both dramatically and in the cold dawning of a new day, following on beautifully from Giuseppe's work, providing an 'in-your-face' statement of the times. Maggie's intentions are fierce and she depicts the Docklands, quite correctly, as a work of art. Her paintings are a true representation of the architects vision, emphasizing lines and angles with the precision of an artists eye; reflecting the attention to detail required in today's somewhat mercenary commercial world. At the same time I have discovered a stillness in her work and true to life, there is a 'spiderweb' featured in one of her pictures that re-iterates the intricacy and highlights the cracks within our very structure. I believe that Maggie's work and use of colour has truly captured the essence of modern London. 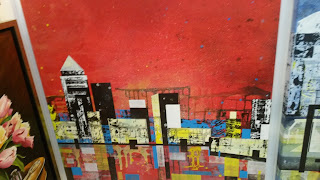 PS: I had to add the pink flamingoes- childhood flights of fancy!